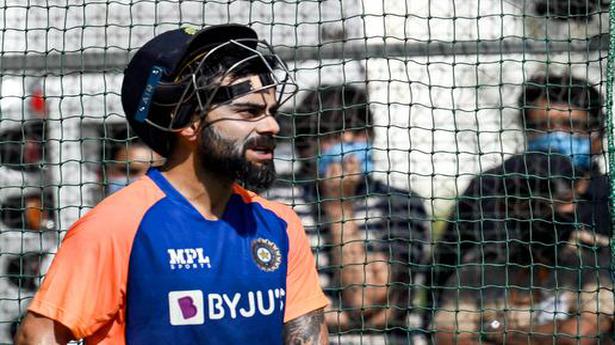 International cricket’s return to Ahmedabad over the next fortnight will decide whether India features in the inaugural World Test Championship (WTC) final against New Zealand in June. A loss in either of the remaining two Tests will see India’s chances go up in smoke. No wonder then that captain Virat Kohli downplayed the WTC factor ahead of the third Test.

“You can’t play for those kinds of reasons [the qualification scenarios]. We are not looking to win one and draw one. We are looking to win both. For us these are two games of cricket and the only thing we are focused on,” Kohli said on Tuesday.

“What it does afterwards is a conversation for later. That is a reality not present right now. In the present moment we are preparing for tomorrow [Wednesday], ready for the grind for five days, wanting to win a Test match for India and then move on to the next one.

“One day at a time is something we have followed for years now. There is no point running far ahead into the future where you have no idea what’s going to happen. We are going to focus on what we can do as individuals in the present moment and let other people think of scenarios and what if and what if not.”

The third Test will also be India’s second floodlit Test at home. Kohli explained the learnings from its maiden pink-ball affair against Bangladesh in Kolkata in 2019.

“The pink ball does tend to swing a lot more than the normal red ball that we play with. We experienced that in the one match that we played in 2019 against Bangladesh,” Kohli said.

“Yes, spin will come in for sure, but I don’t think the new ball and the fast bowlers can be ignored. The pink ball does bring them into the game till the ball is nice and shiny,” he added.

You have reached your limit for free articles this month.

Find mobile-friendly version of articles from the day’s newspaper in one easy-to-read list.

Enjoy reading as many articles as you wish without any limitations.

A select list of articles that match your interests and tastes.

Move smoothly between articles as our pages load instantly.

A one-stop-shop for seeing the latest updates, and managing your preferences.

We brief you on the latest and most important developments, three times a day.

*Our Digital Subscription plans do not currently include the e-paper, crossword and print.

A letter from the Editor

Your support for our journalism is invaluable. It’s a support for truth and fairness in journalism. It has helped us keep apace with events and happenings.

The Hindu has always stood for journalism that is in the public interest. At this difficult time, it becomes even more important that we have access to information that has a bearing on our health and well-being, our lives, and livelihoods. As a subscriber, you are not only a beneficiary of our work but also its enabler.

We also reiterate here the promise that our team of reporters, copy editors, fact-checkers, designers, and photographers will deliver quality journalism that stays away from vested interest and political propaganda.